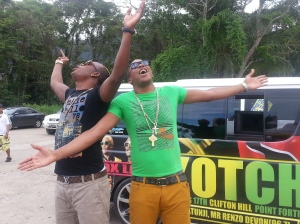 The single which also features rising sensation Daniel Amezquita aka Moska who is an electronic DJ/Producer. The single was given quite the world premiere when #1 DJ Hardwell premiered the track on his Hardwell On Air (143) Radio Show.
The dancehall house single has been receiving great feedback internationally, as the electronic dancehall mix is refreshing, exciting and a new blend between genres of music. RDX who recently completed their ‘Bangers European Tour’ is geared to making more appearances across the Caribbean & North America.
Shuzzr, Publicist for RDX states, ”RDX has always provided the energy in dancehall and it was only a matter of time before that same energy would be bridged between other popular genre of music… RDX is always evolving and their success speaks volume whilst they remain humbled by all”.

The video for “Lose Themselves” will be shoot in December and knowing the energy and creativity that both RDX and Major Lazer possesses, one can expect another epic film. RDX will be one of the specially invited guests at Major Lazer’s concert slated for December 20th, 2013, in Kingston, Jamaica.

Call him the King’s Offspring or call him the Small Axe, either way – singer Jesse Royal walks revolution.

Misheni (Swahili for ‘mission’) was Royal’s debut mixtape in 2012 and the witty follow-up In Comes The Small Axe appeared in summer of this year. The highly impactful musical offerings have solidified his presence as one of the most undeniable proponents of the new roots reggae movement. Royal has been hailed as a musical force; equally potent as he is charismatic, ringing in comparisons to reggae legends of yore.

The Modern Day Judas single is produced by Winta James for Overstand Entertainment. This single triumphs as a timely roots hymn in its unwavering cry for social justice coupled with Royal’s incomparable vocal delivery. It appears on Winta’s Rootsman Riddim release which includes other hard-hitting roots numbers.

This video journeys in a similar vein as the previous One Eye Open number directed by Sameel ‘Kush-I’ Johnson. On this particular outing, Johnson truly captures the fervour of Royal’s music, filming in Swallowfield and the old Edna Manley School of Arts compound for a video that is by far his most intense yet. This is of course the second video from Jesse’s Small Axe mixtape. The video is part of a sequel with a storyline that continues into the Hotter The Battle music video slated for a 2014 premiere. The Hotter The Battle track is produced by Kareem “Remus” Burrell for the XTM.Nation label.

After a successful headline performance at Usain Bolt’s Tracks and Records this past summer, Jesse Royal continues to build his live show following. He was recently in Toronto for a Coronation concert on the 2nd of November at the city’s Opera House. The Modern Day Judas singer appeared with veteran reggae star Luciano, delivering a memorable performance to the largely Canadian audience.

In the meantime, the fruitful Royal/Winta collaboration has also heralded the release of another single, Preyingon the Weak, which appears on the producer’s Militancy Riddim and has already begun to gain traction.